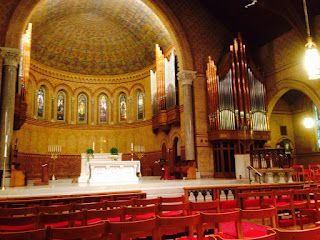 With Christmas fast approaching I realized that I'm at a point in my spiritual journey where it makes sense to think about choosing a church.

So I decided a "Church Tour" was in order.  My plan was to visit at least four local churches and possibly more.  While I didn't consider it imperative that the church tour end in a commitment to any given church I certainly felt open to that possibility.

The church tour began last month but I decided that December would be a nice time to post on it.

The first church on my list was St. Stephen's Episcopal Church in Wilkes-Barre, PA.  I chose St. Stephen's for two reason.  One, it is an absolutely beautiful building and  I wanted to see the inside.  Two, I've read a few very good books by Episcopalians recently (Elaine Pagels

) and that made me curious about their religion.

It was a rainy overcast Sunday when I visited St. Stephen's but the church was absolutely gorgeous. There were big stained glass windows and high vaulted ceilings with angels carved into the rafters.  Every architectural detail was magnificent and the history of the church as it stands now is worth sharing here.

According to St. Stephen's website, on December 25, 1896 cinders caught in a chimney after the Christmas Eve service ignited a fire that destroyed the previous church building. Only the new bell tower on Franklin Street and the foundation were spared.

Reverend Jones, the Rector at the time, vowed that the church would be rebuilt, without diverting any money from outreach or missionary ministries. 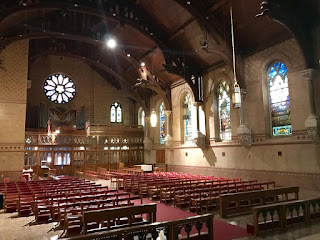 On Christmas Eve 1897, one year after the fire, the church I visited was opened for its very first service.

I liked that the parishioners of St. Stephen's built this incredible building without taking any money away from those in need.  I think it says a lot about who the congregation of St. Stephen's was then - and who they are now.

In the same spirit, St. Stephen's outreach programs remain impressive.  The Church offers a clothes closet, dental clinic, medical clinic and food pantry for local residents. And believe me when I say that many people here are in desperate need of those kind of services.

The mission at St. Stephen's is "To Know Christ and Make Him Known in Word and Deed" and I think they are doing a wonderful job in fulfilling that mandate!

And, of course, the service was beautiful.  In many ways it was similar to a Catholic mass, with which I am more familiar.  It included a Eucharist of both wafer and wine and incense and a scripture based homily. The congregation at St. Stephen's was friendly and I thought that the priest seemed very approachable.  I enjoyed his clear and down to earth sermon and wished I'd had more time to visit.

St. Stephen's offers multiple services including a Wednesday healing service.  The church hosts the King’s College Summer Choir Training Course, sponsored by The Royal School of Church Music in America and offers a total of nine public choral services a week.  The music on the Sunday I attended was lovely.

In summary, St. Stephen's is a great church for anyone who loves beauty and music and the spirit of Christian service and giving.  I enjoyed the morning I spent there very much.  I am very sure I will visit again! 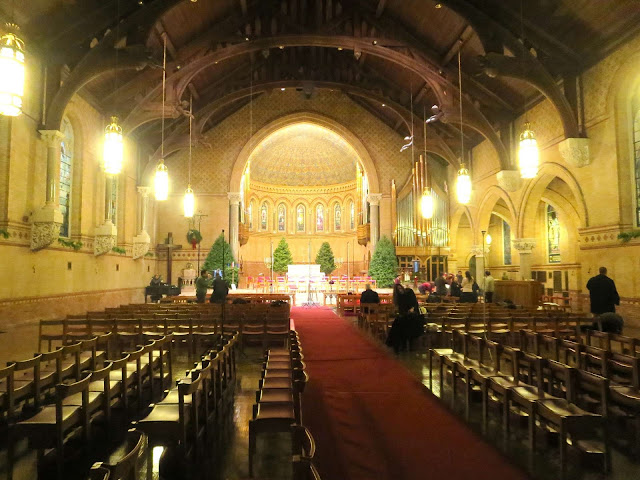 Thank you for taking the time to comment on this article.
Please know that your feedback is cherished!